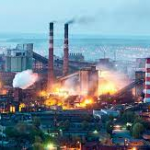 Ukraine’s Zaporizhstal steel mill, partly owned by Metinvest, has started production of a new type of hot-rolled coils for Polish customers. According to Ukrainian media reports, Polish customers have ordered HRCs weighing at least 9 tons each.

Previously, to fulfill such an order, two coils were welded together. Thanks to new production lines, this operation is no longer necessary and saves on packaging and transportation.

The company is thus trying to capitalize on Polish demand for HRC, whose supply has been disrupted by much reduced Ukrainian production and the EU ban on Russian steel.

Russia, Ukraine, and Belarus together accounted for 25 percent of total Polish steel imports in 2021, meaning that the war in Ukraine has forced buyers to look for alternative suppliers.

At the end of March, the steel mill partially resumed production of its operations (read article here) for subsequent shipment of product to the European market. In early April, blast furnaces No. 3 and No. 4 were started up. As a result, April saw Zaporizhstal working at about 50 percent capacity utilization.

Metinvest suspended all production at the steel mill on March 2 due to intensified fighting following the Russian invasion, putting its Zaporizhya coke plant, Zaporizhkoks, offline for use.