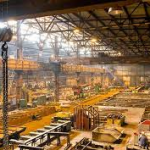 Ukrainian mining and steel company Metinvest reported today that it is partially resuming operations at its Zaporizhstal steel plant, the group’s JV where it holds a 49.99% stake, and aims to reach 150,000 tonnes of production next month.

The Zaporizhstal coil producer in the southern Ukrainian city of Zaporizhia, which was put into “care and maintenance” at the beginning of March shortly after the Russian invasion of Ukraine, is running two of its four blast furnaces Nos. 3 and 4 and has partially restarted its sintering plant. The company expects the first product by the end of this week.

This month, the steel mill will restart one of its two steelmaking furnaces, the double-flame furnace. In April, the steel mill is aiming for at least 20,000-30,000 tonnes of crude steel production, with the goal of increasing production to 150,000 tonnes in May, when both furnaces will be in operation.

Zaporizhstal aims to start rolling almost immediately after obtaining the first steel, and expects most of its initial sales to be made domestically.

It could sell a good amount domestically in Ukraine, as some end users, including producers of formed sections and welded pipes, are also restarting operations.

In addition, the company no longer considers the CIS area, especially Russia and Belarus, as areas where steel can be sold in the future. The company used to distribute up to around 1 million mt/year in the CIS/Eurasian Economic Union.

The conflict, forced shutdowns of Azovstal and Mariupol-based Ilyich Steel reduced the steel mill’s presence in the global steel market from over 11 million tonnes per year to 2.5 million tonnes per year supplied by billet and long rolled products producer Kamet Steel in Kamianske, in Ukraine’s Dnipropetrovsk region, and by the company’s rolling mills outside Ukraine – in Bulgaria, Italy and the UK.

To support steel production at Kamianske, Metinvest relies on coke made from domestically sourced coal from its own mines. The company is not currently shipping coking coal from its fully operational US mine and is selling its production on the open market.

Iron ore concentrate and pellets continue to be Metinvest’s primary export products sold to third parties under current circumstances. The company is limited to about 1 million tonnes per month that it can ship out of Ukraine. The entire volume goes to the EU by rail.

In order to deliver iron ore across the border, Metinvest has to either load the cargo onto several rail cars, or change bogies at border stations due to differences in track thickness between Ukraine and neighbouring central European countries.

In addition, Ukrainian railways and border crossings are very congested these days, because most shippers, including wheat and corn growers, use the same railway lines, because like us they can no longer export by sea. The railway infrastructure is not designed to withstand such heavy traffic.